Home › Christian › Throw Out Your Anchors before the Storm

Throw Out Your Anchors before the Storm 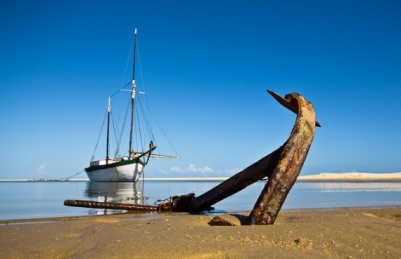 27 Now when the fourteenth night had come, as we were driven up and down in the Adriatic Sea, about midnight the sailors sensed that they were drawing near some land. 28 And they took soundings and found it to be twenty fathoms; and when they had gone a little farther, they took soundings again and found it to be fifteen fathoms. 29 Then, fearing lest we should run aground on the rocks, they dropped four anchors from the stern, and prayed for day to come. 30 And as the sailors were seeking to escape from the ship, when they had let down the skiff into the sea, under pretense of putting out anchors from the prow, 31 Paul said to the centurion and the soldiers, “Unless these men stay in the ship, you cannot be saved. (Acts 27:27-31 NKJV)

What a dreadful time it must have been.  Paul warned the captain and crew that a storm was brewing but they ignored him.  “Come on, Paul.  Look how nice the weather; how bright and sunny the day.”

Isn’t that how things tend to go?  We Christian’s…we get all comfy and cozy with our lives.  Warnings upon warnings are given of an approaching storm, but we don’t listen.  “Ahh well…Yes, I know the world is going to hell in a hand basket, but my life is good; I’m blessed.  If a storm comes up, I will just throw out a few anchors.  The Lord will protect me.”  The problem is that we rarely recognize the storm until we are in the midst of it.  By then it is too late to throw out the anchors.  Prayers prayed out of fear cannot be prayers prayed in faith.

Consider this a warning.  A storm is coming!  Throw out your anchors now so that they may grab hold and sustain you in midst of the storms, whether they be natural or spiritual.  Don’t be as the sailors with Paul who tried to catch up in their faith by fear praying.  It will be too late.

“Then, fearing lest we should run aground on the rocks, they dropped four anchors from the stern, and prayed for day to come.” (Acts 27:29).

Begin now!  A really good starting point is Psalms 91.  Read it out loud every day.  Confess it over you and your family till it gets so deep within your spirit that nothing will shake your faith in the Lord.  Be as the wise who build their spiritual homes on solid rock and not as the fools who build their foundation upon sinking sand.  Be blessed.

8 comments on “Throw Out Your Anchors before the Storm”