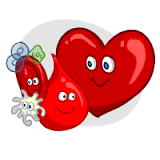 The fact that blood is necessary for life has not really been a hot topic of discussion throughout the centuries.  After all, it is not hard to figure out, “No blood – no life.”  Writings from hundreds of years before the birth of Jesus attest to this.  However, the one part missing from all the writings was the full understanding of the role of blood on life; all writings that is, except for the Book of the Law – The Torah – given to Moses, by God, thousands of years before other writings.

In Leviticus 17, we find an interesting commandment regarding blood.  The Israelite’s were instructed to abstain from the consumption of blood.  Why?  The reason is found in verse 11, “For the life of the flesh is in the blood, and I have given it to you upon the altar to make atonement for your soul…”

The God of Hematology (Study of Blood)

Notice that the Israelite’s were not told that blood is necessary for life, which it undoubtedly is, but instead were told that life as a whole is in the blood.  Think about that for a second.  The fullness of our being, of who we are as individuals, can be found in our blood.  It was not until the twentieth century that mankind began to fully understand and appreciate this fact.  Prior to this understanding, man had some really whacky and ignorant notions that tended to release a person of this precious fluid instead of helping them to maintain it.

The blood is the only connective tissue in the body that remains in constant connection with each and every part of the body.  It carries oxygen, nutrients, and hormones to all parts of the body while at the same time removing harmful waste.  It is the only connective tissue that has both cellular and liquid components.  Life indeed is in the blood.

This is why blood is so important to our Heavenly Father.  The Bible says that if any man is in Christ Jesus, he is a new creation (2 Corinthians 5:17).  This new creation is but a part of the total makeup of the body known as the Church.  Jesus is the head and His blood is the connective tissue that links all parts of the body (atonement.)  It is the blood of Jesus that gives life to the body.

Moses may have not fully understood the why of what he wrote.  However, the fact that he received the words from our Heavenly Father made him scientific before scientific was cool.  Be blessed.

8 comments on “Scientific before Scientific was Cool! Part 2”