Home › Christian › How Satan Suppressed the Power of the Church

How Satan Suppressed the Power of the Church 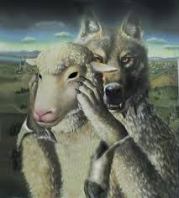 From within the confines of the abyss, raucous laughter echoed off the walls.  The nauseous stench of their foul breath swirled like a whirl wind filling every nook, crack and cranny.

“Tell us again, O’ evil one,” the minions cried excitedly! “Tell us once more how you so masterfully suppressed the power of the body of believers known as the Church!”

Leaning back against his rock throne, Satan laced his fingers together.  Their request pleased him.  Yes, it pleased him immensely.  Closing his eyes, he reflected on how he was able to cripple the Church by convincing many Christian’s that they did not need to use the name of Jesus.  “That Name,” he growled.  The very thought of it made him want to gag.

“Christ,” Satan spat as if he had tasted something foul, “Means the anointed one.  It is His title, but not His name.”  It has taken many years and great persistence, but I have finally convinced a large majority of believers to pray in the name of Christ rather than using His actual name.  The results have caused a weakening of the Church body.

The thought of a weak Church brought a sinister smile to his stony face while causing his imps to howl with laughter.  Motioning for quiet, Satan continued with his lesson.

“Many of these Christian’s are bold to speak of the Christ, yet when faced with saying His actual name will whisper it as if embarrassed or afraid.  By removing the Name of the anointed One, I have removed their power.  The best part is that they now argue amongst themselves and make excuses for why they have no power.”

“In what way,” cackled one imp?

“By claiming that certain gifts and abilities passed away with the original disciples,” Satan answered. “The truth is… they have no faith in that name.  This allows me to run free and unhindered.  Consider the words of the Christ (Jesus) when He said, “These signs will accompany those who have believed: in My name they will cast out demons, they will speak with new tongues; they will pick up serpents, and if they drink any deadly poison, it will not hurt them; they will lay hands on the sick, and they will recover.”  Because of their gullibility I am able to keep them at odds with one another.  As long as they continue arguing and bickering with one another I am free to go into the entire world and wreak havoc wherever I desire.”

But Peter said, “I have no silver and gold, but what I do have I give to you.  In the name of Jesus Christ of Nazareth, rise up and walk!” (Acts 3:6 ESV)